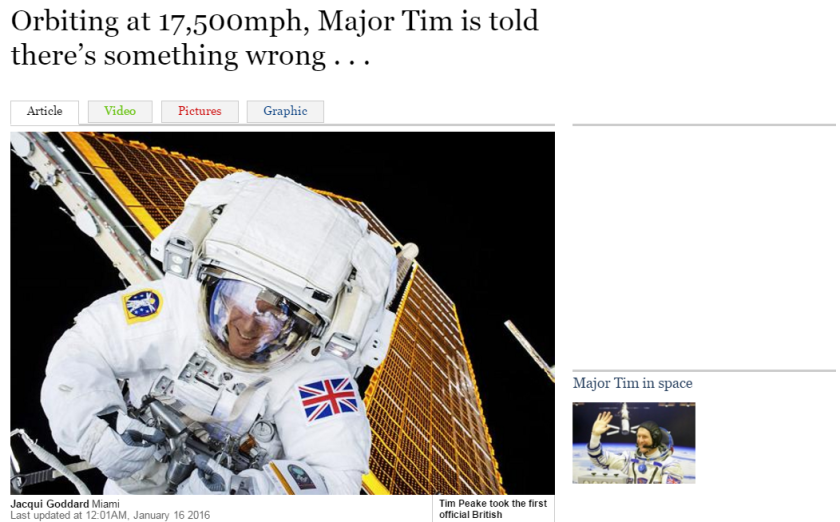 The first spacewalk for an official British astronaut was cut short on safety grounds last night when liquid seeped into the helmet of a colleague of Tim Peake.

Controllers at Nasa aborted the mission outside the International Space Station as a “precaution” a little more than four hours into a planned six-hour spacewalk when Tim Kopra reported a small bubble of water inside his helmet.

A similar occurrence in 2013 led to the near-drowning of Luca Parmitano, an Italian astronaut, when water flooded his helmet, completely covering his eyes and nose.

“The prudent course of action is playing it safe,” said Rob Navias, Nasa’s mission control commentator, as the two astronauts were ordered back inside by the flight director, Royce Renfrew.

Doug Wheelock, an astronaut at mission control — located at Nasa’s Johnson Space Centre in Houston — reported that it was “all hands on deck inside the ISS to assist the spacewalkers” as they cut short their work, gathered up their tools and made their way back to the airlock. “The crew was never in any danger, they’re in good shape,” said Mr Navias last night, noting Major Peake and Colonel Kopra’s calm demeanour under pressure.

Major Parmitano’s troubles two years ago stemmed from a clogged filter in an internal cooling loop that pumps water around the astronauts’ spacesuits to keep them from overheating.

Colonel Kopra’s problem was described initially by Major Peake as a bubble of water “less than golfball size” but minutes later as a “film of water” as much as 4in long and 2in deep.

“The size was a concern. As soon as you can tell it’s cold water, there’s something going on that’s coming from a source in your backpack, and that’s a significant concern,” said Chris Cassidy, chief of Nasa’s astronaut office, who was Parmitano’s spacewalking partner during the 2013 emergency.

Yesterday’s spacewalk was otherwise a success, achieving its primary goals of replacing and fitting new parts to the station’s exterior.

It began 250 miles above Western Australia, took the astronauts four times around the Earth, lasted four orbital sunrises and sunsets and, for the first time in the 51-year history of spacewalking, saw the Union flag flown outside the International Space Station.

“It’s really cool to see a Union flag going out the door. It’s explored all over the world, now it’s explored space,” said Scott Kelly, the station’s American commander, as Major Peake — wearing the flag as a patch sewn on to the shoulder of his $12 million spacesuit — emerged from the airlock into the void at 6.48am Houston time.

“It’s great to be wearing it. It’s a privilege,” replied Major Peake, 43. “Beautiful sunset,” he said as the Sun disappeared below the Earth’s curved horizon. The spacewalk, known to astronauts as an extra-vehicular activity, or EVA, achieved its key aim of replacing a voltage regulator on the station’s exterior that cut out in November, as well as laying power cables to service a new docking port for visiting spacecraft. The unit regulates the flow of power from one of the station’s eight solar arrays, which soak up energy from the Sun. Its failure had left the station’s electrical circuits running at partial capacity.

Major Peake, from Chichester in West Sussex, and Colonel Kopra, 52, from Austin, Texas, had to work quickly. Orbiting at 17,500mph and with a sunrise in space coming every 90 minutes, the pair had little more than half an hour of darkness to remove the failed unit and install its replacement before the Sun caused a resumption of the electrical flow.

Mr Navias called it a “historic moment for Great Britain as Tim Peake moves outside the airlock to become the first British citizen to walk in space”. Lincolnshire-born Michael Foale spacewalked from the shuttle Discovery in 1995 as a Nasa astronaut. Major Peake, who works for the European Space Agency and launched to the ISS on December 15, is the first British citizen funded by the UK government to go into space.

He trained for spacewalks in Nasa’s Neutral Buoyancy Laboratory, a 40ft deep, 6.2 million gallon pool in Houston containing an underwater replica of the ISS, and on computerised practice runs.

“We have been preparing for this specific spacewalk for weeks in space, and months before that on Earth. However, to undertake an EVA actually takes several years of training,” he explained on his ESA blog.

“We have spent many hours working in our spacesuits, ‘floating’ in the largest swimming pool on Earth with a Space Station mockup. We have used virtual reality headsets to re-enact our operations and trained for the worst-case scenario of becoming detached from the Space Station but I guess nothing can fully prepare for the feeling of being outside of a spacecraft in the vacuum of space.”

Though “exhilarated’, he said “I have no time to dwell on these emotions.” A spacewalk is a meticulously planned, highly choreographed affair; Major Peake and Colonel Kopra’s instructions spanned 40 pages, including numerous checks of their equipment and tools.

Their 13-layer spacesuits, which Nasa calls “personal spaceships,” provide life support systems and feature multiple cooling garments and thermal insulation to survive temperature swings from 140C to -175C. They include layers of nylon, spandex, Mylar, Gore-Tex and Kevlar, the material used in bulletproof vests, to protect them from harmful micro-meteorites — specks of space debris that constantly batter spacewalkers.

In Major Peake’s toolkit was a homemade utensil designed to clear any debris that might hamper the smooth turning of a crucial bolt. “In true The Martian style, we fabricated a makeshift tool out of a toothbrush to clean the pinion thread if necessary,” he wrote on his blog.

Major Peake embarked on his pioneering venture with numerous messages of support sent from Earth. David Cameron tweeted: “Good luck on today’s spacewalk. The country will be watching you make history.”

The Who musicians Pete Townshend and Roger Daltrey urged Peake to “stay safe” during the walk. “Good luck,” their tweet read. “I can see for miles and miles and miles!”