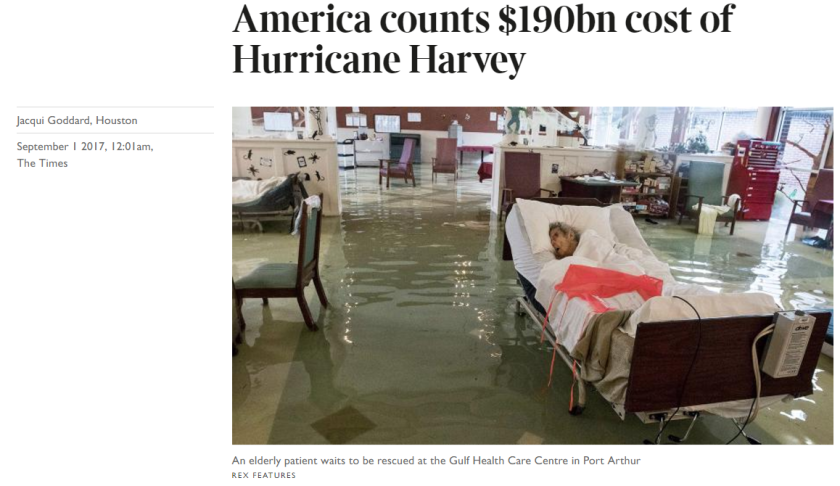 Two US navy warships were on their way to Texas last night to bolster relief efforts in the aftermath of Hurricane Harvey, which may prove to be America’s most expensive natural disaster.

Estimates of the cost range from $75 billion to $190 billion. Hurricane Katrina, by comparison, cost the country $100 billion in 2005. 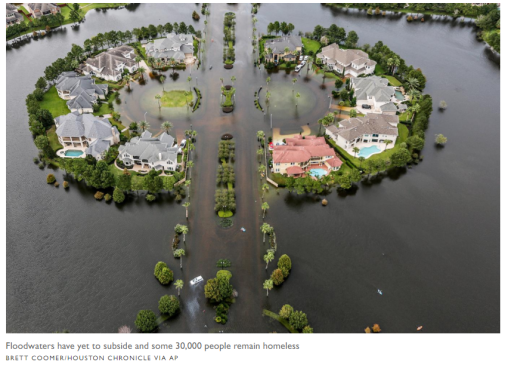 Joel Myers, president of Accuweather, was in no doubt Harvey would top that figure. “This is the costliest and worst natural disaster in American history,” he said. “The disaster is just beginning in certain areas. Parts of Houston, the United States’s fourth-largest city, will be uninhabitable for weeks and possibly months due to water damage, mould, disease-ridden water and all that will follow this thousand-year flood.”

The death toll had reached 38 last night, with officers still paying door-to-door visits in areas where floods had receded to check for more victims.

Hurricane Harvey came ashore in Rockport, Texas, last Friday and has veered on and offshore, making two further landfalls along the Texas coast and dropping record amounts of rain — devastating Houston and the surrounding area with floods.

Even as some residents in the city returned to their saturated homes to begin the clean-up yesterday, others were being evacuated and rescued.

In Beaumont, 90 miles to the east, US coast guard helicopters were ferrying trapped residents to safety and hospitals that had been inundated were evacuating their patients. The population of 118,000 was left with no access to running water after pumps designed to protect the freshwater system failed.

“Every historical weather record has been broken. Harvey has brought more than anyone could have anticipated at local, state and national level,” said Becky Ames, the mayor of Beaumont.

Tornado warnings were issued in Mississippi and Tennessee as the storm headed northeast — but not before leaving 400 roads across Texas inundated and unfit to be driven on, 205 of them in Houston.

With 12 oil refineries offline, the US Energy Department authorised the first emergency release of crude oil reserves since 2012 to try to maintain petrol supplies. Queues formed at filling stations as far away as Dallas, 200 miles north of Houston, as consumers panicked over potential shortages and prices at the pumps rose. 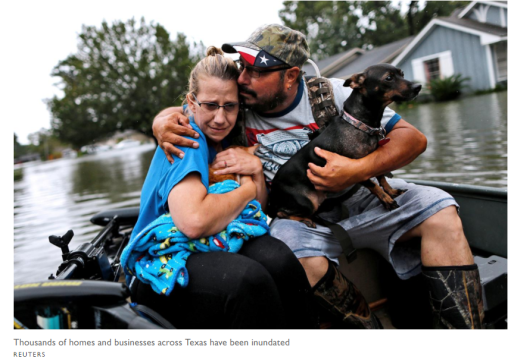 In a further blow the 5,500-mile Colonial Pipeline, which channels 100 million gallons of fuel a day to the nation’s east coast, was shut off. Half of the 26 refineries that supply the pipeline have suspended production and others are working at reduced capacity.

In Crosby, Texas, containers of volatile peroxides exploded at the Arkema chemical compound, forcing the evacuation of some local residents. Fifteen sheriff’s deputies were treated in hospital after inhaling fumes, but later released. Arkema said that the chemicals were a noxious irritant that could affect eyes, skin and lungs. “The plume is incredibly dangerous,” said Brock Long, head of the Federal Emergency Management Agency (Fema). More than 30,000 people left homeless by the storm have been housed in emergency shelters. Fema said it planned to start moving them into hotels.

The agency has already received 325,000 applications for financial aid and had by yesterday paid out $57 million to 45,000 people to cover immediate home repairs, accommodation and uninsured expenses. As many as one in four homes in Harris county, which found itself at the heart of the disaster, was uninsured.

Weather forecasters have predicted up to 40cm (15in) more rain for the region over the weekend. There is also concern over a rapidly intensifying hurricane, Irma, currently about 2,000 miles away across the Atlantic but moving east. It could have a huge impact on the Caribbean next week. Computer models predict that it will then turn northwest, possibly striking the southeastern US the following weekend.

• Mr Trump will personally give $1 million towards disaster relief, the White House said. It did not specify whether the money would come from Mr Trump or his foundation. The president and his wife, Melania, plan to visit Houston and Lake Charles, Louisiana, tomorrow.