Mounds of soaking debris lined streets across Houston yesterday as flood victims returned to clear their devastated homes. They face the imminent threat of infectious disease as they begin a recovery expected to take years.

The heat has returned to Houston and with it the mosquitoes. Health officials worry about the contaminants to which people have been exposed in the water, from household cleaners and petrochemicals to lead and arsenic from waste disposal sites. Flooded sewers have given rise to fears of cholera and typhoid.

A murky tide mark runs around the homes a week after Storm Harvey made landfall then swept across Texas and Louisiana to drop more than 20 trillion gallons of rain.

“Our hearts are heavy for the people who didn’t make it,” Michael Farrias, 51, said. “For all of us who did, we’ve got to show we’re bigger than that storm.”

He had gutted his home in Dickinson, southeast Houston. A skip was full of dripping plasterboard — he had ripped out all the internal walls. Wet plaster had run across the drive and in it were the footprints of the 30 or so friends who had helped. “We have our lives, we have our loved ones. The rest — it’s just stuff,” he said. Mr Farrias, a builder, will move in with his girlfriend, postponing restoration of his house to help others.

President Trump is due in Texas for his second visit today and has declared a national day of prayer tomorrow for the victims. He has asked Congress for an initial $7.85 billion of federal aid for recovery efforts. The White House also warned Congress that failure to raise the debt ceiling, which is expected to be reached by the end of September, may prevent further requests for disaster relief funds.

The high school in Dickinson has turned into an emergency resource centre, stacked with bedding, toiletries, cleaning supplies, food and water. The gymnasium is a medical centre and in the assembly hall rows of tables were heaped with donated clothing. “All day long they’ve been coming through — they want mops, buckets, bleach to clean their houses,” said Tresa Mark, who works as a programme co-ordinator at the school. Outside, other volunteers were handing out bottled water and MREs — “meals ready to eat”, usually used by the military — to a queue that stretched down the road.

Megan Turner teaches children with special needs. “Almost half the kids in my class lost everything,” she said. “It’s powerful to see so many people helping people. I’m just so proud.”

Neighbourhoods were submerged, in places up to the rooftops, but with the water receding large areas now look normal. But inside homes and businesses black mould has started to creep in. “With all the moisture in the air, this is only going to grow,” said Eve Beasley, 59, of Katy, west Houston. Her grand-daughter, who lives with her, has cystic fibrosis and cannot risk being in a contaminated environment. “I’ve been here since 1979 in Houston and I’m looking for the door out. I’m done.” 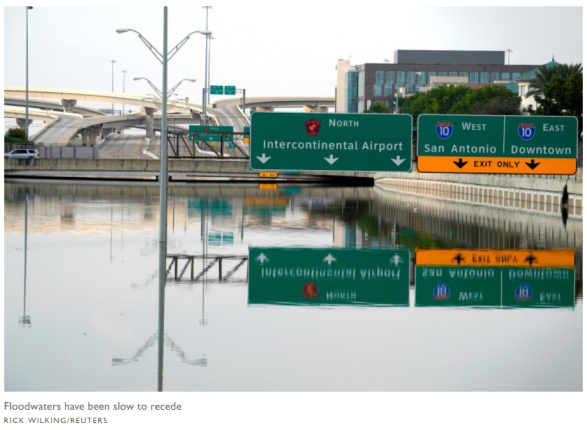 Thousands of homes are still under water. In Beaumont, 90 miles east of Houston, firefighters were smashing their way into attics to check for survivors. Last night a large fire broke out at the Arkema chemical plant in Crosby after floodwater damaged its generators, disabling the refrigeration needed to keep the chemicals cool.

So far 40 people are known to have died. The mortuary for Harris County, which includes metropolitan Houston, was full yesterday and awaiting delivery of a refrigerated lorry.

Seven and eight-figure donations poured in from corporations. JJ Watt, a player for the Houston Texans American football team, launched an appeal on Sunday to raise $200,000; by last night, it had reached $14 million.