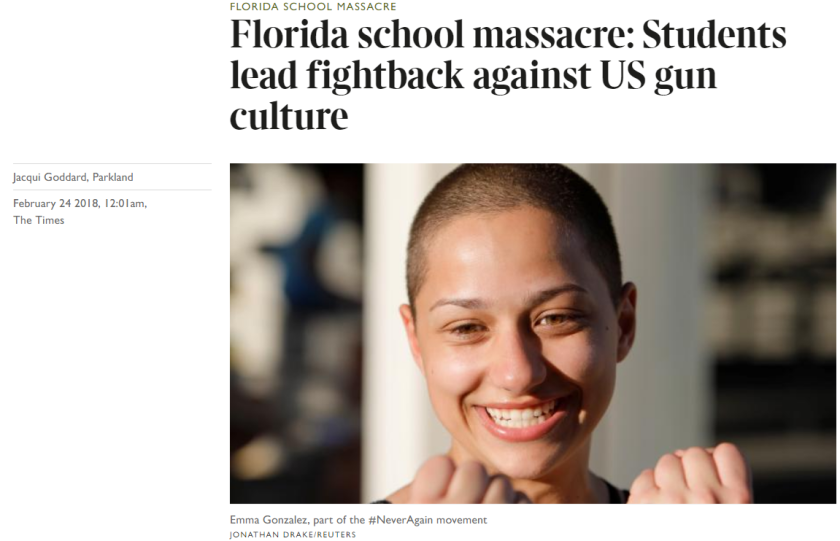 Ten weeks ago, David Hogg and Emma Gonzalez trudged into a farmer’s field with fellow members of their school astronomy club equipped with a laptop computer, a weather balloon, and a 2ft tall model of a house based on the animated Pixar film, Up.

They were part of Project Aquila, which aimed to send meteorological equipment and cameras into the upper atmosphere to gather data, all fitted to the model house and carried aloft by the balloon. They had worked for weeks, staying late after school some days to check and double-check technicalities – but as they prepared for launch that day, disappointment struck as the helium-filled balloon on which it all depended broke loose and flew off, minus its payload.

“I guess we learned a little about adversity that day,” said Hogg, 17.

“But after the last few days, I guess we’ve learned a whole lot more about adversity.”

Now children at Marjory Stoneman Douglas High School in Parkland, Florida, long for the days when the definition of adversity was just a failed science experiment. Now, it is measured by the body-count of their dead friends, by blood, funerals, grieving families, post-traumatic stress, political struggle and the abuse and hatred they have encountered for taking on the deeply polarising issue of gun reform following the massacre of 17 students and staff.

Hogg, a student journalist a the helm of the #NeverAgain movement that he, his best friend Emma, Cameron Kasky and others have established, has had death threats, his mother revealed.

Online trolls have spun conspiracy theories that he is a paid actor hired to spread left-wing propaganda, accused him of being an FBI stooge, a Democratic puppet They have levelled foul-mouthed vitriole and said he is “dancing on graves for his cause.”

His sister Lauren, 14 – who lost four friends in the shooting – has had neo-Nazi abuse posted on her social media account, telling her to die. The family has been forced into an upheaval the details of which they cannot share publicly because of the need to keep their movements and whereabouts guarded– but it involves the FBI, sheriff’s deputies and a lot of fear.

“Can you imagine that? Death threats. These are kids, their friends died, they’re trying to do something about it, and they get death threats,” Hogg’s mother, Rebecca, told The Times.

“It’s really hard on Lauren seeing this attention on her brother, really really hard. She’s 14, she logs onto her Instagram account and sees a comment saying: ‘Die, horse-skank.’  I’ve been called a hard parent, a cold-hearted bitch steering my son on some agenda. Every one of those freaks saying stuff like that just makes us more determined.

“Do I worry about his safety? Yes. But is that going to stop us? No,” said Mrs Boldrick, 51, who works as a teacher at a different school. “If my son and Emma and all those other kids weren’t making a difference, these people wouldn’t be pissed at them. Change terrifies people.”

Following intense lobbying and public pressure, Florida’s Republican Governor, Rick Scott, presented legislative proposals yesterday that include raising the minimum age for buying guns in Florida from 18 to 21, and measures to make it “virtually impossible” for people with mental health problems to use guns.

He called for an armed law enforcement officer to be posted in every Florida school, and $500 million for improved mental health counselling in schools. The plan also calls for improved protection methods including metal detectors and steel doors, and ‘active shooter’ training for all staff and students.

Scott, a member of the National Rifle Association, stopped short, however, of meeting the students’ call for a ban on assault weapons. “I’ve listened to their ideas to make sure this never happens again…It took a lot of guts. What they have gone through is devastating,” said Gov.Scott.

Boldrick was in her classroom on February 14 when a text from Lauren popped up. “Code red, active shooter. I love you mom,” it said. David, meanwhile, was already in action, videoing, gathering information.

“Basically, he was born at 40 years old. He was born with his eyes wide open and in the hospital they said this is rare, that if you’re born with your eyes open it means this person will go on to change the world. He’s a deep thinker, he drifts…But on this, he’s focused.”

David said: “The trolls – they’re deflating but also invigorating. It’s a pretty good thing because they’re making sure our voices are being heard. My Twitter following just tripled. People don’t want to accept this is the new reality of America. ..People think I was too well spoken to be an actual child and to that I say ‘Thank you. Thank you for being disgraceful and immature because you just bought this cause even more publicity.’”

Police and paramedics from the neighbouring town of Coral Springs, which merges into Parkland and where 60 per cent of Stoneman Douglas students live, shared stories of heartbreak and heroism yesterday. Some broke down as they relived the drama.

“What bothers me is that I wish I could have got there sooner and stopped this,” said Chris Crawford, a former US Marine who has been with the police force for 15 years.

“It’s awful, it’s as bad as you can imagine times ten,” he answered when asked about how the shooting had affected him. “It’s hard. It’s awful. I have a two-year-old and I don’t want to send them to school.”

He found a 14-year-old boy bleeding from multiple bullet wounds. “He said he couldn’t breathe, couldn’t walk, so I laid him down on the grass,” he said, describing how he packed a gauze combat dressing into the biggest wound then got another officer to “put his knee into this kid’s back” to keep pressure on the gaping wound.

Sergeant Jeff Heinrich, a police officer, was off-duty on the day of the shooting and was at Stoneman Douglas – where his son is a pupil and his wife an assistant atheletics director – doing voluntary work, watering and weeding the baseball field. He heard the fire alarm go off, saw children walking out calmly, then heard shots. He dropped the hose and ran to the parking lot, wherehe found a teenager named Kyle bleeding from a “massive gunshot wound”.

He grabbed the boy, took him to the clubhouse for first aid, then ran back towards the shooting. A SWAT team member had a spare bulletproof vest, which he threw on over his shorts and T-shirt, and thrust him a spare weapon. Together, they went in search of the shooter, but later found that he had slipped away. After that. He called his wife, who had sheltered with 62 students including their son/

“By the grace of God they found each other and were abe to shelter in place,” he wept, lowering his head for several minutes to compose himself. “It was surreal. It took until the second round of shots fired, and the actual reaction of the kids, for me to actually believe it was happening….you have to hope that it would never happen. But it did.