By Jacqui Goddard in Miami

As a teenager serving her king and country during the Second World War, Jean Briggs was forced to keep a secret that would not be shared for decades – one that saved countless lives and helped to guide the Allied victory.

The Womens Royal Naval Service veteran, who worked on mathematician Alan Turing’s Ultra programme that cracked the German Enigma code, finally received the blaze of glory that befitted her status as a heroine this week, however, as she was laid to rest with British military honours in Nebraska.

“It’s almost a perfect end to her story, that she got the recognition she deserved,” her son, retired US Navy Rear Admiral Robin Watters, said yesterday.

For the last 72 years she was Jean Watters, following her marriage to John Watters, a B-17 pilot with the US Army Air Corps to whom she became engaged shortly after VE Day in 1945. Col.Watters, who survived more than 25 bomber missions over Europe, died in June this year.

Growing up in Bury St Edmunds, Suffolk, she had aspired to become an artist and at the age of 18, due to her promising abilities in art school, was offered a student deferment that would have allowed her to avoid war duty and continue her studies.

“She declined and said ‘No, I’m going to serve my country,’” said her son, explaining how she enlisted in the WRNS and was subsequently picked for the top-secret Ultra programme.

“She had such a sense of duty for someone so young. They picked the right lady,” he added. 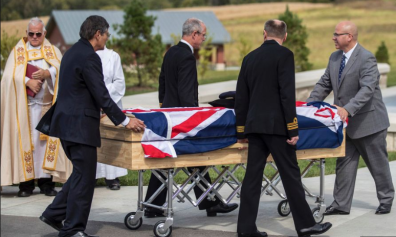 Ultra was the top-secret designation given to encrypted German military communications that were intercepted and decoded by British operatives at the Government Code and Cypher School at Bletchley Park, Buckinghamshire.

Led by Turing, the team built a machine that replicated the functions of Enigma, the German cipher that encrypted secret military signals. Cracking the code gave the Allies a critical window on enemy plans and manoeuvres and was described by Dwight T.Eisenhower, the Supreme Allied Commander, as having played a “decisive” role in bringing the war to a close.

Ultra was kept secret until the 1970s and was described by the historian Thomas Haigh as “one of the most celebrated aspects of British modern history, an inspiring story in which a free society mobilized its intellectual resources against a terrible enemy.”

The story was told in the film The Imitation Game, starring Benedict Cumberbatch as Turing , in 2014.

Mrs Watters and others who worked in the programme were granted medals in recognition of their unique roles in 2009.

The confidential nature of her work at Bletchley and the knowledge of what was at stake if it became known, weighed heavily on Briggs during her role as an intelligence clerk working around the machines.

“She knew everything about what she was doing; she said they would have regular briefings on the information that was being derived from their work, and its importance,” said Mr Watters.

“She said she was so afraid…Think about having secrets on such a scale that even on an older person would be a burden. I can’t imagine at 18 years old having to keep one of the most consequential secrets of the 20th century.”

Watters was laid to rest at Omaha National Cemetery on Monday. Royal Navy officers served as pallbearers and the Union Flag was draped over her coffin.

“This was a lady who was very proud of her service to her country, but always so modest,” said her son.