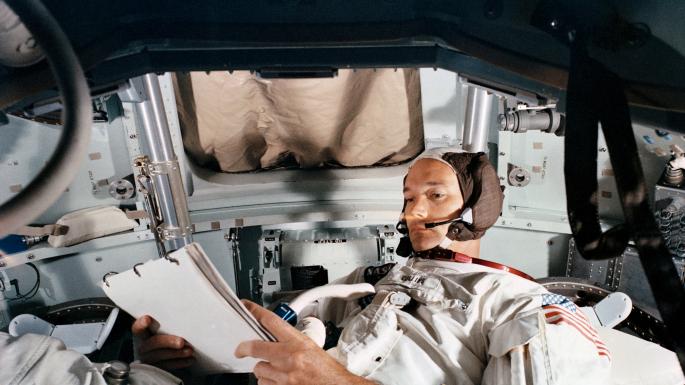 As Neil Armstrong and Buzz Aldrin took their first steps on the moon, a speech on file in the White House was ready for a potentially darker side of the lunar landing. It addressed a fear shared by all the crew — especially Michael Collins, left to orbit above as his crewmates made history below.

For six months prior to the Apollo 11 mission, Collins had agonised over a secret terror that the moon could become their graveyard, leaving him to return home alone.

“What happened if Neil and Buzz were lost on the surface of the moon?” Collins, the pilot of the command module said, contemplating how the course of history would have changed had the lunar lander’s ascent engine failed.

“We never discussed it but we weren’t stupid — we knew darn well if they couldn’t get off, they were dead men and I had a choice. I could commit suicide, or I could head home. I was going to head home and I was going to be a marked man for the rest of my life doing that,” he told The Times.

President Richard Nixon had a speech written for such an event, in which he was to tell the nation: “Fate has ordained that the men who went to the moon to explore in peace will stay on the moon to rest in peace.”

Speaking at an Apollo XI 50th anniversary event on Tuesday night organised by the Aldrin Family Foundation and the Astronaut Scholarship Foundation, Collins, 88, said: “It was present at the back of our brains. How much it was in Neil and Buzz’s mind that they may not get back, I don’t know. Neil in his wisdom was always trying to have redundancy (a back-up). But if that motor didn’t lift off, they would be dead and I was going home.”

At a gala event held under a Saturn V rocket at Kennedy Space Centre’s visitor complex in Florida, Collins and fellow Apollo programme astronauts Charlie Duke and Rusty Schweickart were linked live with two former workers at the Honeysuckle Creek tracking station outside Canberra, Australia, who played a key role in the 1969 landing. Honeysuckle Creek relayed to Earth the historic footage of the lunar landing, along with Armstrong’s first steps, and communicated with Collins as he orbited alone.

“Mike, we looked after you really carefully,” Mike Dinn told Collins over the Cisco Webex link-up. He referred to President Nixon, who while congratulating Aldrin and Armstrong over the radio that day had omitted to mention Collins. “It’s just a shame that your president didn’t seem to remember you were there,” he said.

Aldrin, 89, who did not join the 50th anniversary celebrations at the space centre on Tuesday, held a private celebration in California last week. In brief video footage released afterwards, he spoke of how human spaceflight had stalled since the moon landing. His great hope was that NASA would return to the moonand go onwards to Mars.

“That’s 50 years of non-progress; I think we all ought to be a little ashamed that we can’t do better than that,” he said.