Nasa’s Apollo XI mission that sent Neil Armstrong and Buzz Aldrin to land on the moon, and Michael Collins to orbit it, was part of a nine-year programme that employed 400,000 men and women around the United States. We spoke to some of the workers who made humankind’s first steps on the lunar surface possible — and those who bore witness to their efforts.

Nine years to put a man on the moon

Parker Counts, propulsion test engineer, Marshall Space Flight Centre, Huntsville, Alabama: “We were breaking windows in Huntsville when the Saturn V rockets were on the test stand. On a cloudy day we could break windows in Birmingham, 90 miles away, because when it’s cloudy you get the acoustics bouncing back from the clouds and sending shockwaves. We moved to working six days a week; ten hours on weekdays, eight on Saturdays, and if we had to work Sunday we did. We had a job to do.

“The mood was confidence and that we’d done our work diligently. There’d been the Apollo 1 tragedy in 1967 that killed three astronauts in a fire on the launch pad during a rehearsal; we’d had to work through the grief and make changes that probably then cemented our success in getting to the moon. Apollo 11 was a civilisation-changing event and that thought that ‘Hey, I had a part in it’ — it makes you proud. We went nine years from drawing board to putting men on the moon.” 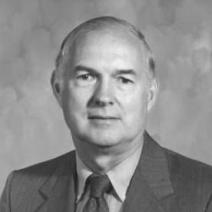 Bill Sneed, manager of Saturn V programme control, Marshall Space Flight Centre, Huntsville, Alabama: “It wasn’t just a matter of putting a man on the moon; we were in a Cold War struggle with the Soviet Union and they had jumped all of us by putting Yuri Gagarin in orbit in 1961. It wasn’t until February 1962 that we put John Glenn into orbit. There was grave concern that communism was so prominent and President Kennedy declared this goal of landing on the moon as a way of leapfrogging and giving us dominance in space and it did that, but there was also so much technology that came out of it. It wasn’t just putting men on the moon and bringing back a bunch of rocks. We had the president, Congress, the public and media all on board. I had a billion-dollar contingency out of a $6 billion budget for the total programme, and any time we had a problem we could really throw dollars at it, put people on it, whatever needed to be done.”

Dan Lickly, software engineer on the Apollo Guidance Computer, MIT instrumentation laboratory/Draper, Cambridge, Massachusetts: “All these books and TV documentaries and movies portrayed Neil Armstrong as a kind of Gary Cooper who couldn’t do much but speak in monosyllables and was very very quiet. That wasn’t my experience of Neil, not at all. We’d be giving a one-hour training lecture and it’d take an hour and a half because Neil just wouldn’t stop asking questions — and we’d answer them all, geek to geek.” 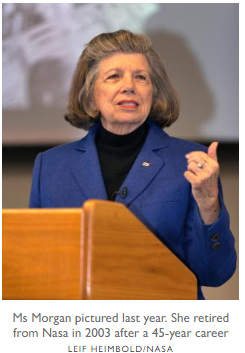 JoAnn Morgan, Apollo XI instrumentation controller, Kennedy Space Centre, Florida: “The last 20 minutes before lift-off the firing room really quietened down. It was quite intense. We just listened to those last few calls that mission control in Houston was making to the astronauts. The booster was so powerful and when that thing lifted off it’s very slow and there’s moments when you think ‘Oh my goodness, it’s not going to go, why doesn’t it get on up out of there?’ It was quite majestic and then the shockwave hit the building.

“I had my elbow on the arm of my chair and I could feel through bone conduction the vibration of the whole floor shaking and the building absorb the shockwave and it was an electrifying moment. We’d done Apollo 8, 9 and 10 to the moon, but this time we were going to be landing . . . They were on their way.”

Jeff Lucas, public spectator, now an educator at Kennedy Space Centre Visitor Complex: “Growing up in Orlando, I remember watching rockets take off from my parents’ front yard. For Apollo 8, in 1968, my father had got home from the Vietnam war just the night before, so the whole family was together to see man go to orbit the moon. At the time of Apollo 11 I was 13, a very impressionable teenager. My parents allowed me to skip school but I had to mow my neighbour’s lawn first, so I got it done real quick to get inside and watch [CBS newscaster] Walter Cronkite on a new TV. When it got down to the last second, we went outside to see it rise up through the sky. It made the earth shake like a California earthquake. It was impressive. Seven and a half million pounds of thrust — equal to 30 jumbo jets. There was a feeling of patriotism, but more importantly it was just wishing they land successfully on the moon.

Margaret Hamilton, computer scientist and software engineer on the Apollo Guidance Computer, MIT instrumentation laboratory/Draper, Cambridge, Massachusetts: “Just before the landing, there was a computer emergency . . . the ‘never supposed to happen’ displays were happening. It was a user error that caused the computer to get overloaded, that caused a restart of the software. It was sheer panic. Back in mission control prior to the mission the astronauts were in the simulator . . . When they would practice, Aldrin would hurry through because he wanted to get to the landing. In practice, they’d notice he would put the rendezvous radar switch on . . . but if he forgot to put the switch back as they went into the landing the 1201 and 1202 alarm went on.

“Jack Garman, an engineer at Houston, recognised it as he’d practised with them a lot. Then on the mission the same thing happened. The boss was saying to Jack: ‘What do we do, what do we do?’ Jack said OK, we know what to do. We just take off the switch and put it back where it belongs . . . go, go, go’ . . . When those alarms came up, I knew it wasn’t supposed to be happening . . . My reaction was, why didn’t it happen before this, why now, during the first mission to land on the moon. At the same time, I still had confidence in the software. I thought it is what it is, we’re going to get through this and in fact it worked. Landing was maybe the most exciting moment in my life. Everything came rushing through my mind, it was an instant feeling of what the software was doing, how we had got there, the things we had gone through to get there. 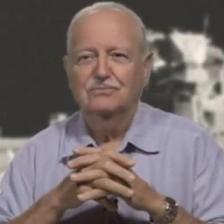 Charlie Mars, chief of the Apollo XI lunar module engineering office, Kennedy Space Centre, Florida: “We were in a conference room at Kennedy Space Centre listening on a speaker. We heard the final calls going down, Buzz reading out that there’s 5 per cent fuel left, Neil trying to find a good spot to land with seconds to spare. We were mentally and emotionally trying to get that vehicle down, willing it to land safely, wanting to help them but knowing we couldn’t. There were 30 or 40 of us in the room, all holding our breath. All around the world people were doing the same. Then we heard Neil — ‘The Eagle has landed’ — and we breathed. We breathed!”

Andy Aldrin, son of Buzz: “We had a squawk box — an intercom — that was always on in the house, that allowed us to hear the communications between the crew and mission control. It was mostly pretty boring; occasionally I could recognise my dad’s voice, but other than the major events of the mission life went on pretty normally.

“When a major event happened, we’d be around the TV, all kinds of new friends in the neighbourhood showed up. After the lunar module landed, I just remember being worried about my dad screwing up and tripping as he came down the ladder and stepped on the moon.

Jim Ogle, Saturn V checkout engineer with Nasa contractor McDonnell Douglas, Kennedy Space Centre: “I’ve got to give it to Armstrong, that guy was as cool as a cucumber. It was an exhilarating feeling; like everybody else in the whole world, I couldn’t believe my eyes when Armstrong came down that ladder and made those famous words: ‘That’s one small step for [a] man, one giant leap for mankind.” Buzz was pretty cool too when they broke the switch on the circuit breaker for the ascent engine. He said, ‘Well, I’ve got this pen, let’s try this’, and he jammed it in the broken switch and that’s what got the engine started to get them off that moon. 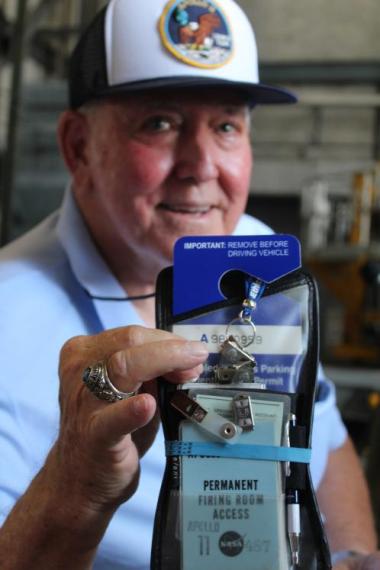 As a young engineer, we really didn’t have the maturity to understand the magnitude of the task that was going on here. As I got older and I look back I say: ‘Oh my gosh, we really did that? Holy mackerel.’ A lot of stuff was done with slide rules back then — a lot of people now don’t know what a slide rule is. And analog computers. The engineers . . . you’re looking at some of the most fantastic minds in the world. But we still have deniers, a lot of people that still don’t believe that we did walk on the moon. I know we did it and I’d take on anyone that wants to challenge me on whether we really did walk on the moon on July 20 1969. I’m 82 now. I’ll take them on.”

Dr Margrit von Braun, daughter of Dr Wernher von Braun, the “father of rocket science” and architect of the Saturn V rocket: “I watched the landing on black-and-white TV in the basement, glued to the screen. We went outside and looked up at the moon and thought, ‘Ohhhh, there’s people walking around up there.’ It was the execution of my father’s dream. But there was also a sense though of ‘Let’s hold off the celebrations until we’ve got them safely home again.’ ” 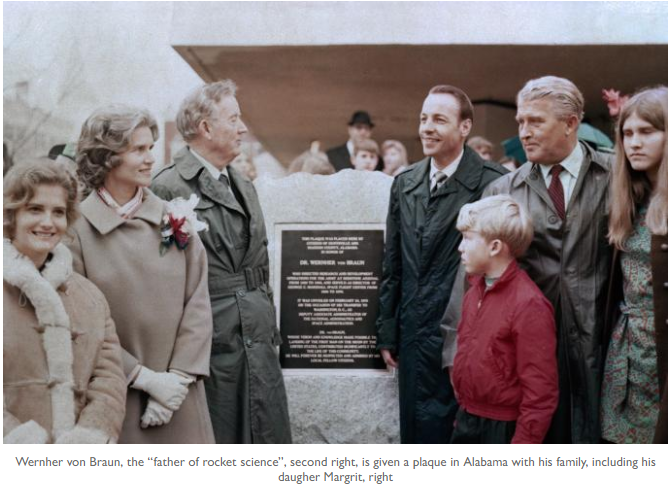 July 24, 1969
John Wolfram, US navy frogman: “The capsule’s coming back through the atmosphere at 2,500mph and that friction causes a long tail of fire, so when you look into the heavens and a dark sky it looks like a falling star coming down over the Pacific. I was invited to be on the Apollo 11 recovery crew because I was a very fast swimmer. There was no raft when I jumped in the water from the helicopter; just me, the sharks and the capsule.

“I swam up and the first thing I was supposed to do was look in the hatch window and see if the astronauts were OK. They gave me a thumbs up. The helicopter was overhead with a doctor in, so I gave him a thumbs up to show they were OK, then I would attach the hatch anchor to stabilise the capsule. The swells were making it bob up and down. I had biological isolation garments and a canister of decontaminant, in case of lunar pathogens; the astronauts had to be scrubbed down because they’d been exposed to those moon samples. At 20 years of age I knew I was making history and the world would be watching.

“I wanted to be sure I did my job professionally; make Nasa happy, the Navy happy, my mother happy. It’s humbling that the first thing the astronauts saw when they came back to Earth was me. Later, Neil Armstrong and Buzz Aldrin signed pictures for me. Neil wrote: ‘To John Wolfram, who shared in our great adventure.’ ”