In happier times, Great Abaco was a laid-back slice of paradise that beckoned tourists with its powdery beaches, lush landscapes and cocktails at sunset.

Now, survivors of Hurricane Dorian throng the Bahamian island’s storm battered, sun-scorched airstrips pleading for evacuation, many with only the clothes on their backs. They are dazed, distressed and desperate.

“We lost our paradise,” says Errily Russell, whose home in Coopers Town, Abaco, was destroyed as 185mph winds tore apart communities like an electric blender and the sea inundated homes.

“But we must go on because God spared us. We can still smile, we have life. That is all we can ask for now.”

She is sitting beside the airstrip at Treasure Cay, where visitors used to shuttle in for luxury getaways – contributing to the economic backbone that tourism provides for Abaco’s 17,000-strong population. Now it is a crisis scene. 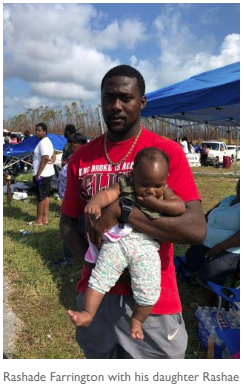 US search and rescue personnel are here, standing in a circle planning strategy; there are corpses to recover in “unimaginable” numbers, according to the Bahamian government. Extra morticians and refrigeration units have been brought in. Residents with no homes and no possessions have made their way here hoping for a ride out, and at least for some of the food and water being flown in. Some have suitcases, some have children, some have pets in carriers. Some have nothing and nobody.

Troops from the Royal Navy auxiliary vessel, RFA Mounts Bay – among the first international help to arrive in the former British colony – are on the road that leads to the airstrip, clearing debris with a mechanical digger. A second ship – HMS Protector, a Royal Navy ice patrol vessel carrying survey boats, all-terrain vehicles and humanitarian aid – is due to arrive in the Bahamas today (Mon). The UK Ministry of Defence has also despatched an additional team of 18 military medics to provide emergency care and surgical services.

Captain Rob Anders of the RFA Mounts Bay told The Times: “People on the ground are in a state of shock and emotional distress and seeing support coming in is reassuring for them. We want them to know help is here.”

Pilots in the US have formed a volunteer airlift operation, loading their aircraft with donated supplies and shuttling from Florida through what has become a congested, high-risk airspace. They range from single-engine aircraft to private and corporate jets, assisting free of charge in the apparent absence of any large-scale, organized airlift.

Captain Peter Vazquez (see video below), a US businessman with a yacht charter company serving the Bahamas, Island Time Ventures, has been flying his twin-engine Piper Navajo back and forth between Treasure Cay and Fort Lauderdale Executive Airport for five days, taking aid in and bringing evacuees out. On Friday, he was asked by a military officer on Great Abaco to take body bags – 200 of them. Tents he flew in on Friday are now pitched beside the runway at Treasure Cay, providing shelter from the brutal heat. Today he is carrying cases of water, batteries, torches and lanterns. An entire hangar at the Florida end has been given over by the airport’s ground handling agency, Banyan Air Service, as a collection point for public relief donations; water, food, chainsaws, tarpaulins, buckets, hygiene and babycare items by the boxload and pallet full.

Agitation is mounting at the government’s failure to get residents out quick enough. Airlines are running shuttles, but on a scale and frequency insufficient to meet demand, and it has fallen to the charity of pilots such as Vazquez to assist in hastening the evacuation. More and bigger aircraft are needed.

“You’re saving lives that have nothing left. Nothing.” he says. “When you see it ….it gets to you in your bones. This is total obliteration. It’s much worse than any hurricane we’ve ever seen.”

The prime minister, Hubert Minnis, has declared Nassau – the capital – at capacity and unable to absorb more refugees. Under mounting pressure to step up the evacuations and reduce the dangerous overload in the skies, it was announced last night that larger capacity planes including from the US Air Force would be joining the airlift.

Military personnel are at Treasure Cay to maintain order. Medical teams have been treating the storm-injured and the sun-ravaged as they await air transport out, hooking up people who have fainted in the heat to intravenous drips and patching up gashes and breaks.

“You’ve seen the film Mad Max?” asks John Bledsoe, a friend and colleague of Capt.Vazquez, after we take off for Treasure Cay. “Well, that’s what you’re going to see.”

The airspace is saturated with emergency activity in and out, but air traffic control over this island is absent due to the power and communications blackout. An unseen guardian codenamed Warlock, circling at high altitude on a US Navy P3 AWACS aircraft, is providing assistance to pilots, watching the radar and calling out alerts to help get them safely on the ground. “I’ve got you,” he reassured Capt Vasquez as we descend onto Great Abaco.

Rogue pilots unprepared to wade through the process of gaining Bahamian government permission to fly in have been switching off their transponders, which identify them on radar and allow radio contact, creating a collision risk. “The airspace picture is worrying,” warned Mark Zee, founder of Ops Group, an aviation intelligence organisation.

Capt.Vasquez said: “We’ve had a couple of close calls. Since Warlock’s been in place, it’s better.”

Abaco and Grand Bahama’s landscapes used to be green, but are now brown, burned by the salinity from the sea surge. For every tree left standing, another five or so were snapped by the wind. Communities are splintered into millions of pieces, whole buildings washed away, smashed, turned upside down. An oil slick stains the turquoise water between the islands; as we flew past the South Riding Point oil storage facility on Grand Bahama, we see its tanks overspilling.

At Treasure Cay, stories of heartbreak abound; of a traumatised mother rendered mute at seeing her husband and seven-year-old child drown, of another with bloodied scratch marks on her neck gouged by her daughter as she tried in vain to cling on before she was wrenched away by a torrent. Several patients evacuated from Abaco to Nassau have declined treatment, according to a doctor who spoke to NBC News, because their families are gone and they simply want to die too.

“I’ve travelled the world, been to war-torn countries, been shot at, threatened with death, threatened with torture – and that was bad. But seeing what this hurricane did – wow, this really, really sucks,” said Capt.Vazquez.

Rashade Farrington, 27, has just what he is wearing and his five-month-old daughter, Rashae, who he wrapped in jackets and sheets to shield her from the screaming winds as their home was destroyed around them. Now he is trying to get to Nassau to stay with his aunt. “I have nowhere else. I don’t know where life will take us now,” he lamented.

Dwight and Raquel Cox sheltered perched on top of the washing machine to escape the water surging into their home in Marsh Harbour, watching the walls tremble and feeling the pressure of the wind hurting their ears. “The second half of the storm, it just devastated us…there were tornadoes, it took roofs, mangled cars…It was horrific, terrifying, surreal,” says Mrs Cox. “No one anticipated this monster.”

Capt. Vazquez and his eight-seater aircraft, which he is running at no expense to evacuees, is their route out. “He is our angel,” says Mrs Cox. “We are just grateful to God.”