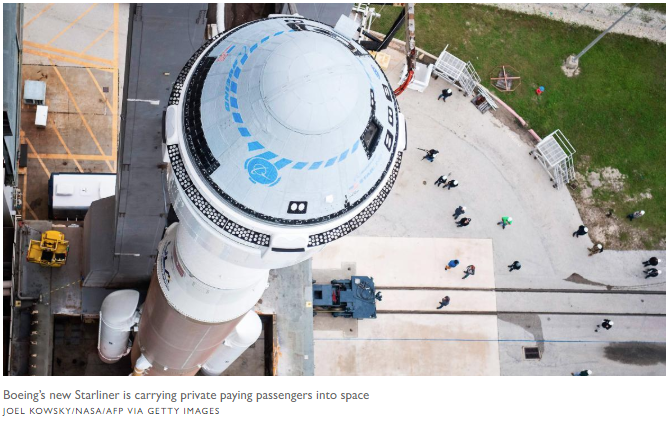 It has been close to a decade since the USA last flew its own astronauts into space. But that is about to change as Boeing launched its new Starliner space taxi today on a week-long test mission.

Built under the terms of a $4.2 billion contract with Nasa, Starliner is designed to carry up to seven astronauts to the International Space Station and destinations of the future, including space hotels and factories.

If the crewless seven-day mission is successful, astronauts will fly Starliner early next year.

“We’re moving into a new era. We’re going to launch American astronauts on American rockets from American soil for the first time since the space shuttle in a way that’s never been done before,” Jim Bridenstine, head of Nasa, said. “This time when we go, we’re going to go with commercial partners; Nasa isn’t purchasing and owning and operating the hardware, we are purchasing a service. This is the next step in a mighty vision.”

Starliner is one of two spacecraft developed under Nasa’s commercial crew programme, which gave Boeing and SpaceX, the company founded by Elon Musk, the task of building and operating transport systems for use in low Earth orbit so the US space agency could focus on longer-term goals. Nasa is building its own spacecraft, the Orion crew capsule, and the world’s most powerful rocket, the Space Launch System, on which it plans to send humans back to the moon and on to Mars.

SpaceX, which received $2.8 billion from Nasa, completed an orbital test flight of its Crew Dragon capsule in March but suffered a setback when the vehicle exploded during engine tests in April. Both contractors are aiming to fly crew early next year, setting up a domestic “space race” to be first.

America has not been able to fly its own astronauts into space since 2011, when it retired its space shuttle fleet. In the eight years since, it has paid the Russian government up to $80 million a time to ferry US crews back and forth to the ISS, launching and landing in Kazakhstan. 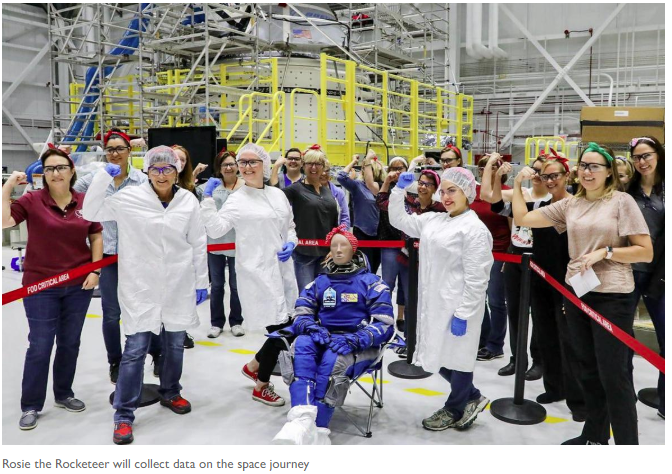 On board Starliner is a dummy named Rosie the Rocketeer, fitted with sensors to collect data that will help determine whether the vehicle is safe for human flight. Described by Melanie Weber, Boeing’s lead launch pad engineer, as “180lb of dead weight”, the dummy had to be loaded using a crane. “She’s pretty tough. She’s going to take the hit for us,” Mike Fincke, 52, one of the five Nasa astronauts lined up to fly Starliner, said yesterday.

The vehicle took off from Cape Canaveral Air Force Station atop a United Launch Alliance Atlas V rocket at 6.36am local time and will travel at 17,500mph on a week-long round trip mission to the ISS, delivering cargo and Christmas presents, to the orbiting laboratory’s six-strong crew 220 miles above Earth. More than 330 scientific experiments take place each month aboard the ISS, from atmospheric observations to robotics, biology and medicine. Goals include the ability to 3D-print human organs in orbit, a feat that is markedly more complex in Earth’s gravity. Once in full service, Starliner will have one seat per mission available to a private paying passenger.

Nicole Mann, 42, a Nasa astronaut on Starliner’s crew, said: “It’s opening up space not only to commercial and government astronauts but also to folks who can capture the amazement of space — maybe teachers, maybe journalists, maybe artists — and translate it back to people on Earth.”