There was a whoosh, a thud, and the glow of an orange flame. Then, as half a million people held their breath, Elon Musk’s $90 million Falcon Heavy rocket soared aloft, powered by 27 engines, driving five million pounds of thrust, and shaking the ground for miles around.

Crowds cheered as the world’s most powerful rocket for 45 years thundered away from Kennedy Space Center in Florida last night on an unmanned test flight that opens the door to future missions to the moon, Mars and beyond.

Carried in the nose cone was a red Tesla Roadster car belonging to Mr Musk, the founder of SpaceX and Tesla, with a dummy astronaut at the wheel and the stereo programmed to play Space Oddity by David Bowie on a journey to reach an Earth-Mars orbit around the Sun at 24,000km/h. 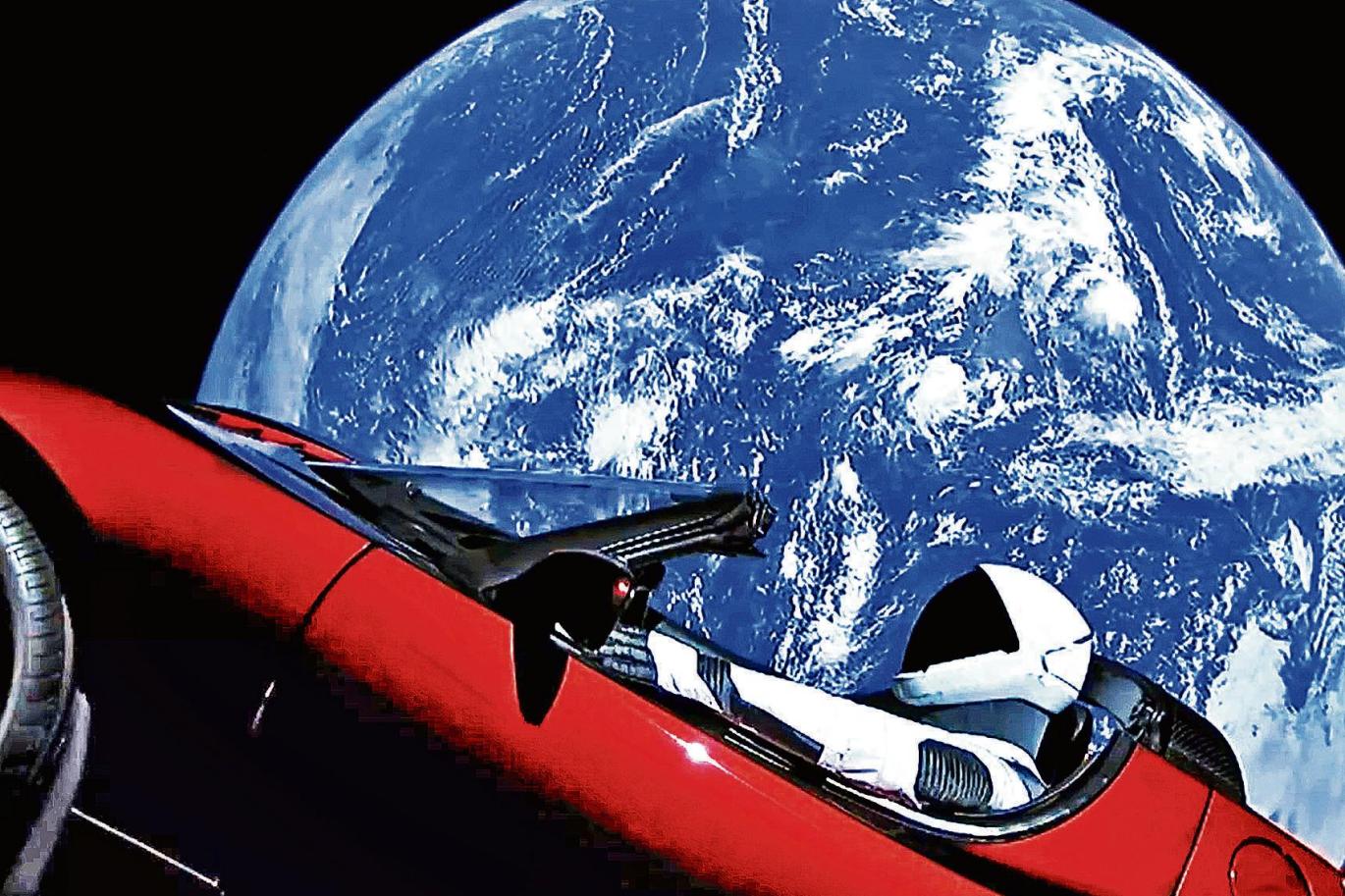 The rocket carried a Tesla Roadster car with a dummy astronaut, nicknamed Starman, at the wheelSPACEX/AP

Two of the rocket’s three boosters landed perfectly a few miles from Cape Canaveral within minutes of the launch. The central core of the rocket was to have landed on a drone ship in the Atlantic but instead hit the Atlantic at 300mph, the force enough to send shrapnel into the drone ship and damage two engines.

In surreal live links from space, cameras on the Tesla car showed Starman — the name given to the dummy astronaut — cruising along with the earth looming large below and the cosmos spread out before him.

Falcon Heavy is the most powerful rocket, in terms of the load it can carry, since Saturn V launched Nasa’s Apollo moon missions and retired in 1973. It can potentially haul a bigger cargo and human crew further into space than any other rocket, and at a knockdown price.

Mr Musk, 46, had declared himself “giddy and happy” before the launch. Terry Virts, a former commander of the International Space Station, said last night: “This is exciting because it’s a truly heavy-lift rocket developed almost entirely at private expense and it opens up opportunities in space that we’ve just not had until now.”

The rocket would need further testing before any crewed flight.

Thousands of people had come to bear witness to a slice of space history. Many of them, though, wiping tears from their eyes, had specifically come to see Elon Musk’s boldest space venture yet.

The two booster rockets appeared out of the wake of the Falcon Heavy like two flames dropping from the sky. Within minutes of take-off and after triggering twin sonic booms they performed a perfect simultaneous landing a few miles from the launchpad — the first such booster rockets to have returned to Earth, ready to be used again. “You’ve done it, Elon, you’ve done it,” cried one voice, speaking for many. 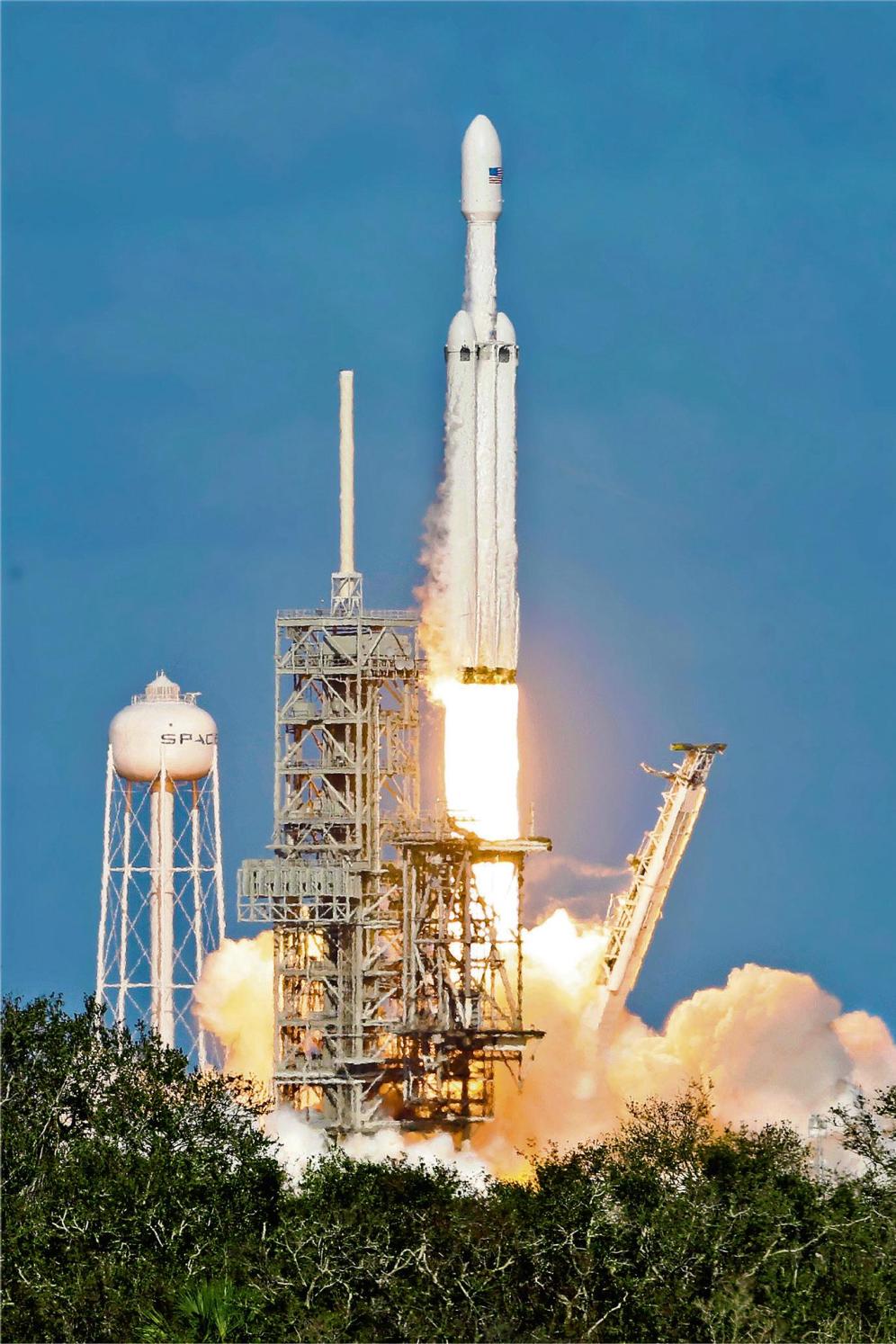 Parents skipped work and children stayed out of school, generations of families piling into cars and joining the procession of traffic to the Kennedy Space Center and surrounding Florida space coast region, as if on a pilgrimage. In parks, in bars, outside offices and in the streets, they turned their faces northeast and hoped.

“I want my daughter to be able to look back and say, ‘My daddy took me to that rocket launch, the one that everyone talks about, the one that was famous and had Elon Musk’s car on it’,” said Brian Tardi, 40, of Vero Beach, who got up at 4am to drive 80 miles to the space centre with his baby daughter, Isabella, and father, James, 63.

While most of the estimated 500,000-strong audience took up viewing spots 11 miles or more from the launchpad, Mr Tardi and his father paid $195 each to watch from the closest vantage point, just under four miles from the pad in front of a space centre hangar housing exhibits including moon rock and a Saturn V rocket, the model that flew men to the lunar surface six times. Across the alligator-infested Banana River they gazed at launchpad 39a, from where the last of those missions launched in 1973, and watched the countdown clock tick down.

“My daughter was a year old yesterday. We came firstly because this is history and secondly we will always support the space programme,” Mr Tardi said. “We moved to Florida 17 years ago and watched from our back yard as rockets launched and went on their way. But this one, well, we had to be right here.” 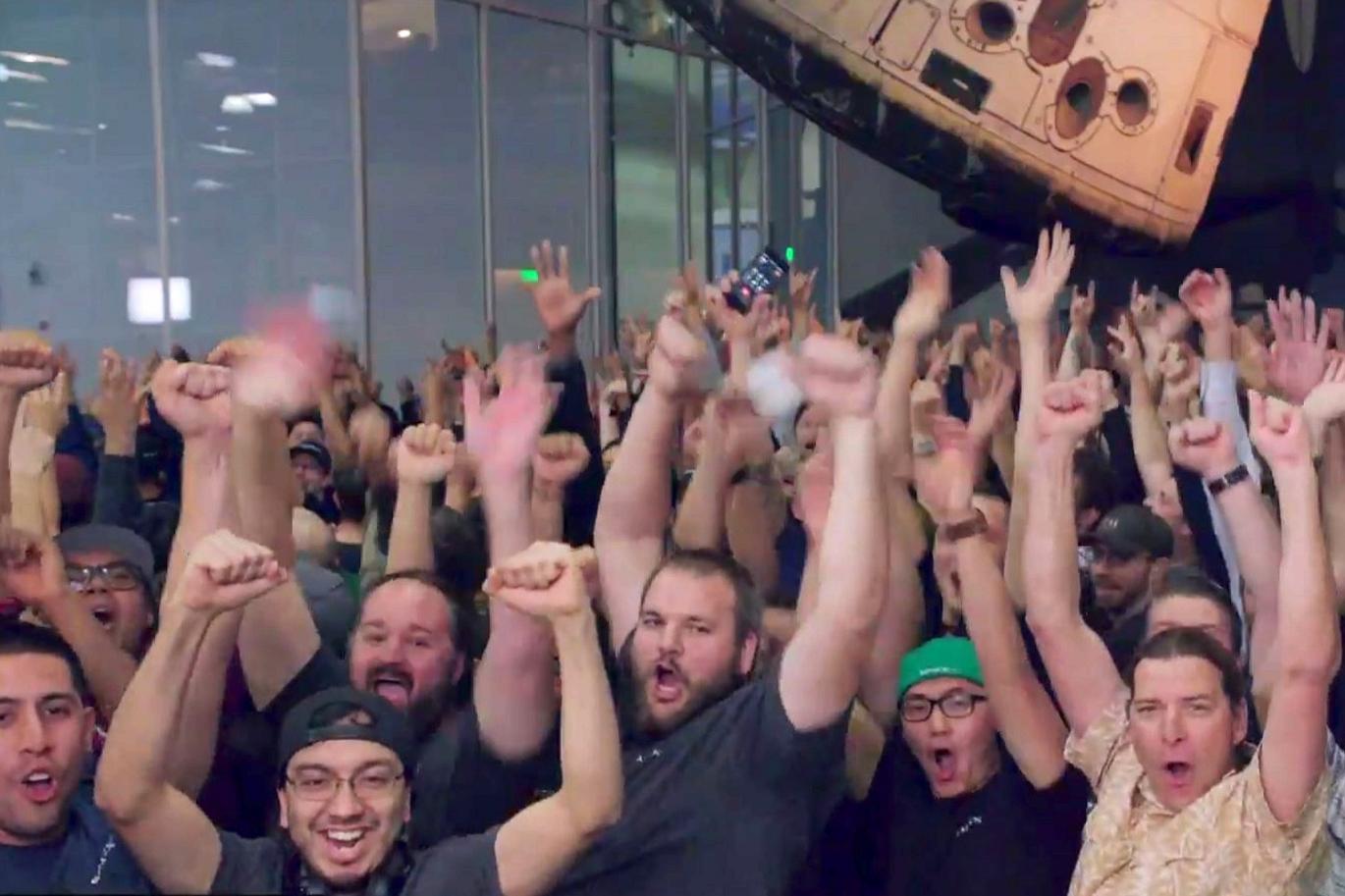 His father, James, had watched rockets soar over Cape Canaveral for five decades, starting with the Freedom 7 flight in 1961 that made the astronaut Alan Shepard the first American in space. “I want my granddaughter to know what it’s like to watch those things go up,” he said. “Who knows, maybe when she’s older she could go up there herself and bring back Elon’s car.”

Fred West, 60, and his wife, Connie, 71, drove from Orlando, 60 miles west. “I came for the horsepower, those engines that roar. I wanted to feel the ground shake. I wanted to see for myself that big boy taking off,” Mr West, who works as an IT manager, said. “I think Elon’s going to be the example to follow, the pinnacle. I hope the government can learn from him and hopefully put some more cash into the Nasa programmes to get us places again. He’s a pioneer. He’s sticking his neck out to go further and better. I don’t know if it’s going to work but we’ll find out.

“I’m American, I’m proud of our accomplishments in space. The first time they walked on the moon I was there watching in black and white on a TV at my parents’ house. Now here we are about to see the rocket that we hope will take us back there.”

The audience at the Saturn V Center sat in the stands rubbing on sunscreen, picnicking and taking photographs of themselves with celebrities including Bill Nye the Science Guy, a television scientist. “I hear some of you want to live and work on Mars?” he shouted to children in the crowd, who cheered and waved back. “Well party on, guys.”

In the VIP viewing area the guests included Buzz Aldrin, who in 1969 followed Neil Armstrong on to the moon. Now aged 88, he is an active proponent for sending astronauts deeper into space. “Get your ass to Mars,” his T-shirt read. “It’s a beautiful day for a rocket launch from my favourite launchpad,” he posted on social media.

Bob Giffen worked on the Nasa space programme between 1962 and 1998, playing a key role on the launch team for all the Apollo moonshots and 88 space shuttle launches. “It’s not like going back to the moon but I tell you it’s approaching it,” he said. “It’s a little bit emotional for me because this was my life. This guy Elon Musk, he has my total respect. Thanks to what he’s been doing, soon we can go back to the moon, we can seriously think about going to Mars . . . This is a big step back to where we were.”